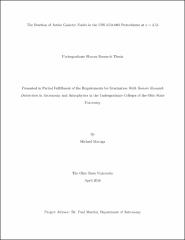 The incidence of Active Galactic Nuclei (AGN) with local environment is a potentially valuable probe of the mechanisms that trigger and provide fuel for accretion onto supermassive black holes. While the correlation between AGN fraction and environment has been well-studied in the local universe, AGN fractions have been measured for relatively few dense environments at high redshift. In this paper we present a measurement of the X-ray AGN fraction in the USS 1558-003 protocluster associated with the z = 2:53 radio galaxy 4C-00:62, which has been shown to be the progenitor of a cluster of galaxies in the local universe. Our measurement is based on a 100ks Chandra observation, follow-up spectroscopy from the Multi-Object Double Spectrograph on the Large Binocular Telescope, and broad and narrow band photometry. These data are sensitive to AGN more luminous than L_X > 2 x 10^43 erg s^-1 in the rest-frame hard X-ray band (2-10 keV). We have identified two X-ray AGN at the redshift of USS 1558-003, one of which is the radio galaxy. We determine that 2.0 (+2.6,-1.3) % of the H alpha emitters in the protocluster are X-ray AGN. Unlike most other high-redshift cluster progenitors studied with similar techniques, USS 1558-003 does not have a significantly higher fraction of AGN than field galaxies at similar redshifts. This lower AGN fraction is inconsistent with the expectation that the higher gas fractions at high redshift, combined with the high galaxy densities and modest relative velocities in protoclusters, should produce higher AGN fractions.