The Impact of Collaborative Consumption on the Environmental Efficiency of Well-Being (EWEB) of Residents in Columbus, Ohio 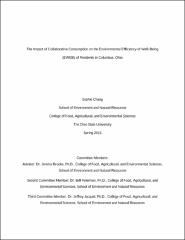