Appropriating a Golden Age: Models of Social Change in Ahmet Hamdi Tanpinar’s A Mind at Peace 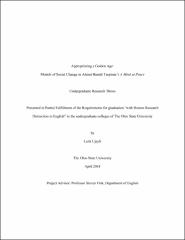 Translated into English by Erdağ Göknar in 2008, A Mind at Peace by Ahmet Hamdi Tanpinar is considered a milestone modernist novel of Turkish literature. At the time of its publication in 1948, however, A Mind at Peace opposed Turkey’s dominant political and social trends. The long collapse of the Ottoman Empire imbued its former citizens with a common sense of loss and humiliation, tarnishing its legacy. Moreover, Ottoman cultural and artistic traditions’ close association with the elite exacerbated the impetus to diminish any vestige of the Empire, an impetus that would drive Turkey’s first president, Mustafa Kemal. Later given the surname Atatürk, Mustafa Kemal implemented a series of westernizing reforms that tried to separate the new Turkish state from its Ottoman forefathers. Born in 1901, Ahmet Hamdi Tanpinar experienced the dramatic reforms of the Kemalist Cultural Revolution first-hand. In A Mind at Peace, Tanpinar illustrates the ensuing identity crisis—a tension between past and present, East and West that imbues the novel’s cosmopolitan characters with a sense of anxiety and uncertainty that inhibits the creation of a meaningful intellectual and cultural narrative. Tanpinar believed that a collective narrative for Turkey should be mined from the past, a past accessed through Ottoman classical music. Closely linked to the legacy of the Mevlevî Order and the Ottoman sultans, classical music represented a key to Turkey’s Ottoman past. Moreover, Ottoman classical music’s makam structure offered Tanpinar an effective language to describe models of social change. Throughout the novel, Tanpinar uses the makam, a melody type that provides a set of foundational rules regarding rhythm and scale, to represent the past in Turkey. Like a makam organizes a melody, the past organizes society. By viewing Ottoman classical music as a synecdoche for Turkey in A Mind at Peace, it is possible to identify four distinct social change models espoused by each of A Mind at Peace’s four primary characters: İhsan, Suad, Mümtaz, and Nuran. At the end of the novel, however, each model fails. By severing Turkey from its Ottoman golden age and imposing a Western model onto an Eastern foundation, the Kemalist Cultural Revolution robbed Turkish society of its makam, the solid ground necessary to propel the new nation into the future. In the resulting void, Tanpinar’s characters fail to rebuild a foundation out of the obliterated past. By resisting the impulse to espouse a single doctrine, Tanpinar differentiates A Mind at Peace from the era’s prevailing national allegories and didactic party novels. Instead, Tanpinar uses the novel to highlight the problems in Turkish society, to confront the consequences of the Kemalist Cultural Revolution, and to demonstrate the importance of the constant search for solutions.