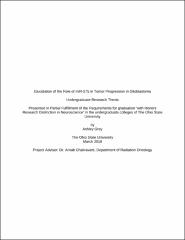 Background: Glioblastoma (GBM) patients currently face poor survival outcomes with an average survival rate less than 15 months with treatment (radiation and temozolomide), while only 3-5% of patients survive more than 36 months (1). Although the mechanisms underlying tumor development and progression are still being elucidated, microRNAs (miRNAs) are promising candidates to explore as novel biomarkers and therapeutic targets in GBM due to their size, stability, and myriad of target genes (2). Previously, in a univariable analysis, our lab showed that higher levels of miR-575 were significantly associated with worse overall survival in GBM patients (HR: 1.3; p-value: 5.77E-05; FDR p-value: 0.0036). Additionally, miR-575 was found to be significantly associated with worse overall survival independent of age, gender, treatment and KPS (Karnofsky’s Performance Status) in a multivariable analysis (HR: 1.2; p: 0.012; 95% CI (1.04-1.4)). Based on this preliminary finding, we hypothesized that miR-575 acts as an oncogene in GBM. Methods: Cell proliferation, colony formation, and migration assays were performed to investigate the physiological role of miR-575 in GBM cell lines. qPCR, immunoblots, and luciferase assays were performed to validate the downstream targets of miR-575, determined by in silico database analyses. Clonogenic assays and cell viability assays were then used to assess the effect of miR-575 on radiosensitivity and chemosensitivity, respectively. Results: Overexpression of miR-575 significantly increased cell proliferation and cell motility in different GBM cell lines in vitro. p27/CDKN1B and BLID/BRCC2, both tumor-suppressor genes, were identified as putative targets of miR-575 and their expression was inversely correlated with miR-575 in vitro. No clear effect of miR-575 was observed on radiosensitivity and chemosensitivity. Conclusion: Our results suggest that miR-575 may serve as a novel prognostic biomarker in GBM, with higher expression correlating with worse overall survival. miR-575 likely acts as an oncogene by targeting tumor-suppressor genes p27 and BLID. Knowledge of the role of miR-575 in tumor progression as well its underlying mechanisms may improve determination of prognosis and treatment response in GBM. Future work will focus on validating miR-575 as a prognostic biomarker in an independent GBM cohort. The physiological study of miR-575 should be replicated in primary glioma cell lines prior to in vivo experiments. Furthermore, additional target genes were identified during in silico analyses that should be investigated for further elucidation of the mechanisms underlying the oncogenic effect of miR-575 in GBM.