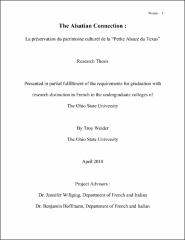 The Alsatian Connection: Preserving the Cultural Heritage of the Little Alsace of Texas

The rural Texan community of Castroville was founded in September 1844 by Henri Castro and a few dozen European colonists. The majority of these immigrants were from the French border region of Alsace, which had long been fought over by the French and the Germans. These Alsatians possessed their own unique regional culture that was the product of this complicated history, and while they were French citizens, their language, cuisine, architecture, and customs were Germanic in origin. This community, while fewer than 30 miles west from San Antonio, remained very isolated for one hundred years, and it preserved the language and culture of its homeland. During this period, one was more likely to hear Alsatian than English in Castroville, but two World Wars and a number of sociocultural factors led to the rapid decline of Texas Alsatian. After years of irreversible linguistic decline, local activists attempted to revive the Alsatian culture of the town. In the 1970's, a series of exchanges and partnerships between the "Little Alsace of Texas" and Alsace, France was initiated, and a cultural renaissance ensued. Numerous heritage associations were founded, many old Texas Alsatian buildings were restored, and old recipes and traditions were reintroduced. While these efforts have managed to keep the culture alive, language use in the region is continuing its rapid decline. Today few people can speak Alsatian, and this once dominant group feels that its influence in the town is declining, as 'outsiders' are moving in and San Antonio continues its rapid expansion westward. Current identity politics play a major role in a town trying to preserve its foreign heritage while receiving an influx of new Mexican and American residents. Castroville has been changing for decades, but globalization and an aging population of Alsatian speakers are threatening the future of this community. Within the next generation, the Alsatian language will die out in Castroville, but despite recognizing the imminent loss of their language, the Texas Alsatians are making major efforts to preserve their culture. Their efforts contradict the common belief of some linguists that when a language dies, the culture to which belongs to is lost as well. Through first-hand interviews, we will analyze these preservation efforts as well as local perceptions of threats to the Castrovillois' cultural heritage. Castroville serves as a unique case study on cultural preservation, and this community represents a micro-history of many larger global trends.