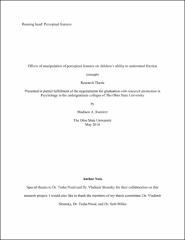 The formation of a strong foundation in early math education can enable a child to develop a deeper understanding of math in their future academic endeavors. Complex math concepts (e.g., fractions) are particularly challenging for elementary-age children to grasp (Bailey et al., 2012; Department of Education, 1997). In the current study, we explored children’s ability to learn and generalize difficult fraction concepts through an abstraction task in the face of varying perceptual information (as encountered in the real world). We presented four-to six-year-old children with a computer task that displayed exemplars of novel fractions that progressed from perceptually impoverished to perceptually rich (concreteness fading; per Fyfe et al., 2014). Through the use of a pre- to post-test design, the present study examined whether children could learn and generalize a novel fraction concept following training (pre- to post-test gains). Data from Experiment 1 show that children could learn a novel fraction concept through this concreteness training in an abstraction task, both for a trained and an untrained exemplar. A follow-up experiment explored the mechanism behind children’s success in the original abstraction task. Data from Experiment 2 suggest that children used of a visual strategy when identifying a trained exemplar, but appeared to use a whole number strategy when presented with untrained fractions, such that they succeeded at identifying a new fraction if they could successfully identify its numerator. Pre- to post-test gains on a more traditional fraction task are also discussed. These findings have implications for curriculum development and teacher training.