The Battling Buckeyes of the 37th Infantry Division 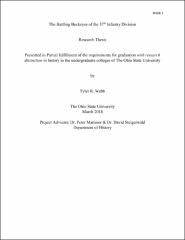 The 37th Infantry Division that was forged during the fires of World War I was again called upon by its nation after December 7th, 1941. These men not only fought for the United States, but also for Ohio. The 37th Infantry Division’s original constituents were Ohio National Guard units, leading to its nickname, “the Buckeye Division.” The soldiers’ bond to Ohio was an integral part of the division spirit, as the division history recalls “it was generally assumed that Ohio men belonged to the 37th Division and that the 37th Division belonged to Ohio.” The Buckeye soldiers carried their banner across the Pacific for nearly four years, fighting against the Imperial Japanese Army on various islands starting with defense preparations in Fiji, where approximately 40 percent of the division consisted of Ohioans. Their battles included the invasions of New Georgia, Bougainville, and the Philippines. The 37th proved to be an effective fighting force under the leadership of their exceptional commander, Major General Robert S. Beightler, from Marysville, Ohio. His leadership was best exemplified by the fact that he was only one of two National Guard division commanders not relieved of command throughout the war. This thesis investigates the leadership of Beightler, the role of the 37th in its battles, and furthers analysis of the lesser known battles on New Georgia and Bougainville. This study also provides insight into the once tense relationship between the Regular Army and the National Guard. However, perhaps the most important result of this research will be a better appreciation of the heroes who were the Battling Buckeyes.

Presented at the 85th Meeting of the Society for Military History