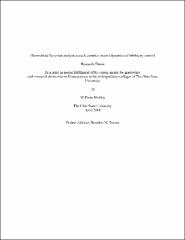 Cognitive control has been of interest to psychologists and neuroscientists because of its contribution to understanding individual differences, impulsivity, addiction, and obsessive-compulsive disorder. Two tasks used to test cognitive control are the Go/No-Go (GNG) and Stop-Signal (SS) tasks. In the GNG task, subjects are given a cue to respond or withhold a response at the beginning of a trial. The SS task extends this basic paradigm by including the possibility that a “Go” cue may switch to a response-withholding cue. Behavioral and functional magnetic resonance imaging (fMRI) data, extracted for twenty- four regions of interest (ROIs), were collected from eleven subjects who completed both the GNG and SS tasks. In this study, blood oxygenation level-dependent (BOLD) responses were fit using a hierarchical Bayesian analysis to five increasingly complex models of the trial-wise neural activation to improve the signal-to-noise ratio and explore differences in neural activation between response (Go trials) and response inhibition (No-Go/Stop trials). We found that constructing a hierarchy, or adding multiple levels to the model, greatly constrained the predicted BOLD signal by systematically removing outliers. Additionally, increasing model complexity elucidated brain regions that played a role solely in carrying out a response (Go trials). We next replicated these results using the more complicated SS task. We found, from adding a hierarchical structure, that some brain areas showed less activation after a stop signal than during either a Go or No-Go trial. Our results suggest hierarchical modeling is a useful tool in interpreting often noisy fMRI data.