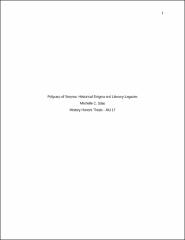 Saint Polycarp of Smyrna, a second-century Christian bishop and martyr, is a historical enigma, and the extant documents surrounding him give few insights into this historical figure. The problem is that scholars have grabbed at any information they can in order to fledge out his biography, without taking into account the possible legendary nature of certain accounts. The texts surrounding Polycarp can be broken into two categories. Ignatius’ letters, Polycarp’s Letter to the Philippians, fragments of Papias, and Irenaeus’ Letter to Victor have reliable information for the historical Polycarp. The remaining texts are historically unreliable for Polycarp’s biography because they represent several independent, legendary traditions that seek to capture Polycarp’s legacy. These texts include the Martyrdom of Polycarp, Irenaeus’ Adversus Haereses and Letter to Florinus, the Harris Fragments, and the Vita Polycarpi. I analyze the reliable texts and then the unreliable ones in order to demonstrate that the historical Polycarp differs from the legendary Polycarp. The unreliable texts represent two different, independent legendary traditions, namely a Johannine and a non-Johannine Polycarp, with different motives and functions of portraying Polycarp in their own way. While the unreliability of the legendary accounts and their function in using Polycarp to support the authors’ own religious agendas indicate that they should not be used to fledge out Polycarp’s historical biography, these accounts do present significant functions, implications, and historical data for the time periods and communities in which they were written, which I trace in my paper. Several significant conclusions can be drawn from this critical methodology: the historical apostolic link between Polycarp and John the apostle is false, scholars must cease from attempts to date the Martyrdom of Polycarp, and there was at least one tradition among Christians which had no knowledge of a connection between Polycarp and John.