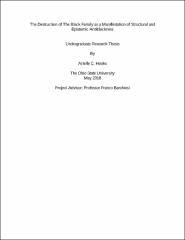 This thesis aims to analyze how the racialized power that has constituted blackness in the wake of the Middle Passage has violently destroyed the possibility of family as a condition of a black ontology that, in the making of America as a structurally antiblack society, has been rendered an oxymoron. In relation to that structural antiblack violence, African American practices of making family after abolition have been constitutively precarious, always exposed to the obliterating force of the state and civil society, and generally in need, for their very survival, to aim at a broader, collective reconstitution of communities as a radical project of black self-determination. Confronted with the structures owing their very social, epistemic, and psychic stability to its enforced impossibility, the black family is always already a radical practice of critique and fugitivity. This topic is significant because it intends to examine the way whiteness places pressure on blacks to assimilate to Western and Eurocentric values under slavery and after emancipation. It argues that the black family is not only shaped by structural forces but also epistemic violence which posits the white family as virtuous and the embodiment of civilization. The propagation of family values by the state served in fact to criminalize, pathologize, and ultimately destroy black families while hindering the upward mobility of blacks and at white family life as an object of emulation, which required internalized black self-punishment and self-deprecation. It is important to compare the familial values and practices of African-Americans to white Americans in order to understand how oppressive dominant family values may have been on African-Americans. By comparing these values, I intend to investigate the concept of family itself and whether the way white Americans have sought to structure their ideas of the black family according to concepts presented as natural while being shaped by racialized power and anti-black violence.