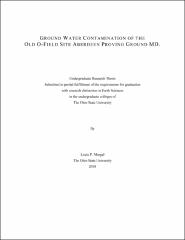 The United States military is known for unsafe practices in disposing of toxic chemicals and materials. Aberdeen Proving Grounds in Maryland is no exception. One of the dumping sites located in the proving grounds is called the O-Field area. This site is located on Edgewood area of the base in a location called Gunpowder Neck. The O-Field area is only a few hundred meters east of Gunpowder River and two hundred meters south of Watson Creek. The site was set up during World War II and was used through the 1970’s. The contamination at the site includes but is not limited to, lead, arsenic, DDT, organic and inorganic volatiles, PCB’s, cadmium, chlorinated hydrocarbons and herbicides. This site is one of the most contaminated and dangerous sites the United States military has. Dumping at this site since the 1940s has led directly to contamination of the upper unconfined aquifer. The upper unconfined aquifer consists of alluvial sand deposits with clay lenses. The contaminated groundwater in the unconfined aquifer directly discharges into Watson Creek to the northeast. The military has made a large push to try and clean up this Old O-Field area by installing a pump and treat system. This was done to prevent the contamination or adjacent surface waters, which flow into Chesapeake Bay only a few kilometers away.