Discrimination and Depression in Lesbian, Gay, and Bisexual Individuals: The Role of Emotion Regulation 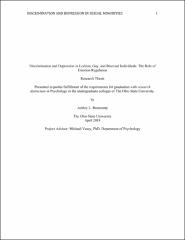 Background: Lesbian, gay, and bisexual (LGB) individuals consistently demonstrate higher rates of mental illness compared to heterosexual peers (Cochran, 2001). One explanation for this might involve experiences with discrimination (Bostwick et al., 2010). Indeed, Meyer’s (2003) minority stress theory proposes that other’s negative evaluations might induce poor psychological outcomes. The mechanisms behind this phenomenon are less clear. One possibility might involve their approaches to emotion regulation (ER), the processes by which individuals modulate how, when, and which emotions they experience (Gross, 1998). The present study examined the effect of discrimination on state-level ER in an LGB sample. We expected that individuals high in depressive symptoms would be more likely to use maladaptive ER strategies in response to a discriminatory stimulus, compared to those low in depressive symptoms. Method: LGB adults (N=169) completed an online study in which they watched an affirming or discriminatory video and reflected on this experience in a writing task. Responses were coded for three ER strategies (rumination, worry, reappraisal). We ran regressions predicting state ER strategy use during the reflection task using depression symptoms (measured by the CES-D) and video (discriminatory, affirming). Results: The model was a predictor of state rumination (F(2, 168) = 2.77, p =.066, R2=.032), and reappraisal (F(2, 167) = 2.71, p =.07, R2=.020), but it did not predict state worry (F(2, 168) = 0.37, p =.70, R2=.004). Specifically, participants made on average 3.95% more ruminative statements and 2.52% more reappraisal statements in the discriminatory condition relative to the affirming condition. Depression scores were not significant predictors of state ER (ps > .18). Conclusions: These findings suggest that LGB individuals utilize both adaptive and maladaptive ER strategies to cope with experiences of discrimination. Interestingly, we found that depression was unrelated to state ER use. Most research examining depression and ER has used trait measures, more research is needed to understand how state and trait ER strategy use converge. Prevention and intervention efforts with this population may want to focus on increasing the ratio of adaptive to maladaptive strategy use in discriminatory contexts, to reduce the immense mental health burden within the LGB community.