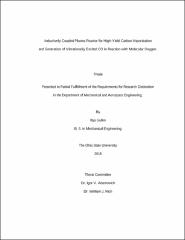 Recent work in the Nonequilibrium Thermodynamics Laboratories demonstrated that a chemical reaction between carbon atoms, generated in a high-temperature arc discharge with graphite electrodes, and molecular oxygen produces highly vibrationally excited CO. In these experiments, absolute population inversion among CO vibrational levels has been detected in a collision-dominated environment, suggesting feasibility of development of a novel CO chemical laser. This laser would be able to operate in a high-speed airflow over a hypersonic vehicle, with carbon vapor generated by surface ablation or by evaporation of amorphous carbon powder injected into the flow. Carbon atoms would then react with molecular oxygen present in the flow. To achieve optical gain sufficient for laser power generation, the rate of C atom production needs to be scaled up by at least an order of magnitude, compared to the yield obtained in the arc discharge used in the previous work. The approach used in the present work is to increase the high-temperature plasma volume, by using an inductively coupled, volumetric RF discharge sustained in a mixture of micron-size amorphous carbon particles and argon carrier gas, in a custom-design quartz cell. The temperature in the RF discharge, up to T = 2600 K at the discharge power of 1 kW, is inferred from CO infrared emission spectra measured by a Fourier Transform Infrared (FTIR) spectrometer. Carbon vapor generated in the discharge is injected into the main low-temperature flow of argon or nitrogen, and oxygen is added to the flow further downstream. Preliminary experiments indicate that at these conditions, vibrationally excited carbon monoxide, up to vibrational level v=6, is produced in the reaction of C atoms with oxygen molecules, C + O2 → CO(v) + O, at low-temperature conditions in the laser resonator, T = 400 K. Vibrational level populations of the CO product generated by this reaction are inferred from CO infrared emission spectra. Further experiments quantifying the yield of vibrationally excited CO, as well as lasing tests, are underway.