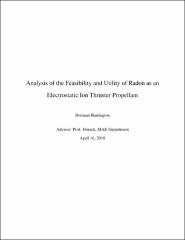 The feasibility of using radon produced through decay of parent isotopes stored as fuel, as propellant in an ion thruster, is evaluated. It was believed that this approach could result in reduction of power consumption, spacecraft mass, and mission time. Analysis is done of discharge loss, power supply through Stirling convertors, propellant separation, cost, and range safety. It was found that the power and mass benefits are relatively small and heavily dependent upon the performance of technology which is not yet available. Further, absent significant improvements in isotope separation methods, the cost would be astronomical (on the order of that of the entire rest of the mission), and there would be serious safety concerns. Accordingly, it is determined that the concept is not feasible, and does not merit further study at this time.