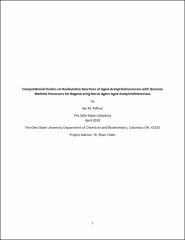 Organophosphorus compounds (OPs) such as sarin, soman, and tabun are toxic nerve agents used in chemical warfare and as pesticides. These OPs covalently bond with Ser203, a catalytic residue in the enzyme acetylcholinesterase (AChE), preventing hydrolysis of the neurotransmitter acetylcholine into acetate and choline. Once exposed to an OP compound, the inhibited AChE will undergo an irreversible process known as aging, where the OP-AChE complex will dealkylate and form a stable phosphonate anion on the Ser203 residue, inactivating the enzyme. Without functioning AChE, acetylcholine accumulates in the central nervous system causing seizures, vomiting, and often death. Currently, there are no known therapeutic methods to reverse this aging process to regain enzymatic activity. However, inhibited AChE can be restored to the active AChE before the onset of the aging process by treatment with pharmaceuticals containing an oxime functional group. The goal of this project is to discover a compound that will realkylate the phosphonate group on the Ser203 in aged-AChE, which can then be restored to the active AChE by oxime treatment. Literature shows that quinone methides (QMs) are capable of alkylating phosphodiesters, which are structurally similar to the phosphylated Ser203 residue in the aged-AChE active site. Through computational methods (molecular docking, molecular dynamics, and tomodock), potential poses in AChE of a variety of quinone methide precursors (QMPs) were analyzed in silico to determine their putative efficacy in vitro.