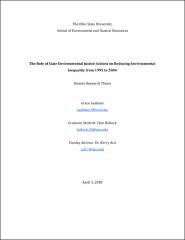 In 1994 President Bill Clinton signed Executive Order 12898 requiring state environmental protection agencies to consider how decisions differentially impact poor and minority communities. Since this time, states have enacted a diverse set of actions to achieve environmental justice (EJ) in their states. Despite this ongoing effort to minimize the racial and economic gaps in exposure, there is still evidence of disparities. For example from 1995 to 2004 national-level research indicates that African Americans were consistently exposed to almost twice the amount of toxic air pollutants as Whites (Ard 2015). Moreover, African Americans of greater socioeconomic status were more exposed to toxins than Whites of lower socioeconomic status (Ard 2015). The following paper breaks down these findings by state in order to determine if state-level variation in environmental inequality can be partly explained by state actions (laws, policies, efforts and movements) implemented to reduce environmental inequality. We use Hasting College of Law's comprehensive survey of EJ Legislation enacted by states from 1994 to 2004 to evaluate if those states with more actions, and/or stronger actions are associated with smaller disparities between racial and socioeconomic groups over this decade. We found that states with the highest number of "strong" EJ actions do not necessarily have the greatest reductions in exposure inequality. Thus, there is evidence that some state environmental justice actions may not be effective.