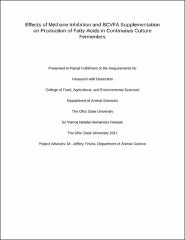 Ruminants, such as cows, use microorganisms to digest fiber in order to absorb nutrients. As the microbes digest fiber they create H2 which the methanogens (a type of archaea) use to make methane. Methane produced by ruminants is not only a source of greenhouse gasses in the atmosphere, about 3% of the total methane produced, but also is potentially wasted metabolizable energy. There is current research on the relationship of methane inhibition in bacteria, suggesting the movement of aqueous hydrogen (hydrogen has been proven to increase with methane inhibition) helps in the production of longer chain fatty acids, such as valerate and caproate (Hristov, 2015). Longer chain fatty acids are used in the cell of bacteria to make the cell membrane more rigid, while branched chain fatty acids are used to make the cell membrane more flexible. To test the effects of inhibiting methane production, the following four artificial rumens continuous culture fermenters with 4 different treatments; a 3-nitrooxipropanol (NOP), a branched chain violate fatty acids (BCVFA), one treated with both NOP and BCVFA and a control with no added treatment. During a 3 day period samples for VFA analysis, fiber analysis and methane analysis were collected. We expected that the NOP group would decrease methane production, increase the amount of longer chain fatty acids produced, and increase the fiber digestibility. The BCVFA group will be expected to increase fiber digestibility, while the group treated with both NOP and BCVFA would increase the rate of the combined previous outcomes. These findings would indicate that inhibiting methane would increase the formation of longer chain fatty acids; subsequently, bacteria will grow and reproduce more rapidly allowing the cow to digest more bacteria and receive more metabolizable energy. This study could help decrease the amount of methane created by cows while improving overall production.