How Does the Presence of a Live Animal Affect the Millennial Generation's Attitudes towards Zoos and Species Conservation? 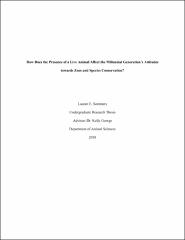 Zoos and aquariums have unique opportunities to educate the public utilizing human-animal interactions. Many zoos claim success in educating their audiences and inspiring pro-conservation outcomes, but little research exists to confirm this. Existing research focuses on family members and assesses knowledge gained and attitudes of participants depending on variables such as animal observability, animal behaviors, or presences of zoo educators. This study begins to fill these literature gaps, focusing on the millennial generation and measuring participants’ support of conservation and zoos financially and via social media in addition to attitudes and knowledge. Participants were recruited randomly through posted flyers advertising the study. Given that the flyer included the name of the Columbus Zoo & Aquarium, participants more than likely had interest in the study due to previous animal or zoo interest. This potential bias should be avoided in future studies. Presence of live animals is this study’s independent variable. Participants completed a pre-test survey, attended one of two live presentations (randomly assigned) about conservation by the Columbus Zoo and Aquarium, and completed a post-test survey. Controlled in both presentations were space, presenter, topics, and species. One presentation (treatment n=21) included live animals, while the other (control n=13) did not. Results show that treatment group participants answered with significantly more positive attitudes to the following statements about zoo animal care: animal welfare is a focus of the zoo (p=0.016), zoo animals are able to adapt to human-created environments (p=0.002) and zoos create spaces for their animals that allow expression of natural behaviors (p=0.015). Treatment participants also had significantly more positive attitudes toward black footed penguins (p=0.046) and cheetahs (p=0.046). These results matched our hypothesis that human-live animal interactions increase positive attitudes towards the species. Also, the results suggest the presence of live animals increases the positive impacts of zoo conservation education.