Development and characterization of processed, high-lipid piglet formula enriched with phospholipids and evaluation of its protein digestibility post-heat treatment 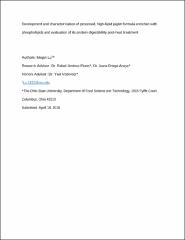 Homogenization and heat-treatment of piglet formula could providers researchers who artificially rear neonatal pigs an efficiency, less added variability, and more flexibility in their studies. But the processing of piglet formula must be validated, as homogenization and heat-treatment both affect the surface load of the milk fat globule membrane(MFGM), a natural emulsifying agent in dairy products. It is hypothesized that heat-treatment of a high-lipid (8% w/v), homogenized piglet formula will have reduced digestibility in the piglet due to accumulated adsorption of whey protein on the MFGM surface that limits protease access to cleavage sites. Piglet formula was developed to mimic the nutrient profile of sow milk, processed with HTST and UHT conditions, and digested in-vitro by porcine pepsin. Aliquots were taken at 3, 5, 10, 15, 20, 30, 60, and 120 minutes and analyzed with SDS-PAGE using stain-free gels. The digestion of casein and whey proteins was evaluated by the change in their band intensities over time. Casein was largely digested within the first three minutes, while whey proteins were digested gradually. Overall digestion of protein was evaluated by the change in band intensity of the peptide fraction over digestion time. However, inadequate formula hydration rendered the results inconclusive, and more trials are required. Nonetheless, it was seen that UHT processing increased the viscosity of the piglet formula (UHT: 10.8±0.26, HTST: 4.9±0.26, control: 4.8±0.22 cP), which is important for stability and palatability considerations.