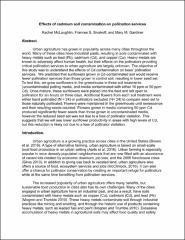 Urban agriculture has grown in popularity across many cities throughout the world. Many of these cities have industrial pasts, resulting in soils contaminated with heavy metals such as lead (Pb), cadmium (Cd), and copper (Cu). Heavy metals are known to adversely affect human health, but their effects on the pollinators providing critical pollination services to urban agriculture are largely unknown. The objective of this study was to understand the effects of Cd contamination on bees' pollination services. We predicted that sunflowers grown in Cd-contaminated soil would receive fewer pollination services than those grown in control soil, resulting in lower seed set. To test this, we grew sunflowers in the greenhouse in three soil treatments (uncontaminated potting media, and media contaminated with either 10 ppm or 50 ppm Cd). Once mature, these sunflowers were placed into the field and left open to pollination for six hours on three days. Additional flowers from each soil treatment were either hand pollinated (N = 24) or pollinators excluded (N= 24) to compare seed set to those naturally pollinated. Flowers were maintained in the greenhouse until senescence and their resulting seeds counted. Flowers grown in media containing 50 ppm Cd produced significantly fewer seeds than those grown in uncontaminated media, however the reduced seed set was not due to a loss of pollinator visitation. This suggests that we will see lower sunflower productivity in areas with high levels of Cd, but this reduction is likely not due to a loss of pollinator visitation.