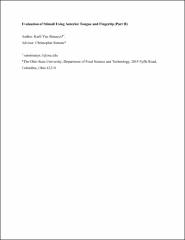 While the system for texture perception on the dermis has been well researched, there has been little work done on texture perception in the oral cavity. This study seeks to compare edge and point sensitivity of the anterior tongue to the fingertip by using a simple letter identification task. It is hypothesized that the tongue will be better at edge and point detection as the ability to evaluate objects within the oral cavity in the absence of visual cues plays a vital role in chewing and swallowing. Small, plastic alphabet letters of various sizes were created and bound to tongue depressors. During the experiment, thirty subjects were asked to close their eyes, assess a letter stimulus using either the fingertip or the anterior tongue, and respond with the identity of the letter they perceived. In the first part, they were presented with a stimulus and asked to lick it with the anterior one third of their tongue. This process was repeated with their fingertip. If correct, subjects were given the next smallest letter size in the next round; if incorrect, they were given the next largest letter. In order to analyze the data collected, the detection threshold will be calculated as the mean of eight reversals along the ladder. Binomial statistics will be used to determine if people are significantly more accurate with their tongue than with their fingers. This data will confirm whether the tongue or the fingertip has a greater ability to detect edges and points. Results from this study, combined with data from future comparative tactile sensitivity studies using other stimuli and oral surfaces, will help to build a better picture of the mechanisms of texture perception of oral tissues. This knowledge can, in turn, provide insight into how texture perception may influence food preferences.