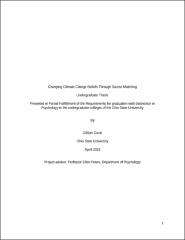 Climate change is a controversial topic. Most scientists believe climate change is occurring, but a large segment of the population disagrees, and disbelievers are more likely to be conservative. As such, researchers have examined many ways to increase belief in human caused climate change, and there has been some disagreement regarding the best way to do so. The purpose of this study is to examine how message source characteristics, recipient political ideology, and recipient political and scientific knowledge interact to predict reception of persuasive messages about climate change, and perhaps resolve some disagreement in the literature. Participants were first asked about their political affiliation, were then asked science and political questions to assess knowledge, and about their political affiliation. They were also asked questions regarding their belief in climate change, and their belief that it is human caused. They were randomly assigned to see a message from a source who matched their political ideology (a source match) or one that did not (a mismatch); messages included photos, bios, and a quote about climate change. We hypothesized that we would find source matching effects, such that conservative participants would be more persuaded by military, business, and religious sources, and that liberal participants would be more persuaded by scientists and celebrities. We also expected that effects of source expertise and source match would be greatest for high-knowledge conservative participants, who would be especially skeptical of messages about climate change. However, our messages did not seem to influence participants' climate change worry at all. More specifically, we expected that messages from conservative sources with high perceived expertise would have the greatest positive impact on climate-change belief for high knowledge participants. Instead, we found that participant characteristics (i.e., political ideology and political/scientific knowledge) interacted to predict climate change worry and environmentally-friendly behavioral intentions, such that liberals were more worried and had greater behavioral intentions than conservatives, and this effect was stronger when knowledge was high.