Where There’s Smoke There’s Fire: Examining Associated Press Coverage of Wildfires in the US 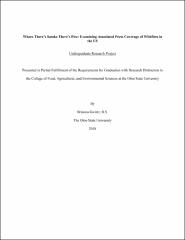 This research project examined newspaper articles surrounding United States wildfires that were published by the Associated Press. Following the Starbuck Fires in the western United States, which devastated many farms and ranches in 2017, I wanted to investigate if and how print media focused on agricultural and environmental issues related to wildfire tragedies. Using the framing theory, this study examined how news surrounding wildfires is framed and whether or not agricultural and environmental topics are discussed. Using Lexis Nexis, I searched for articles published by the Associated Press between November 1, 2012, and November 1, 2017. I then examined a sample set of 5 percent of the 2,990 articles (n=150), some of which contained several newswire stories. In articles that classified as newswires, I assigned a frame and actor to each timestamp. In total, there were 243 stories within the 150 articles and then assigned actors to each story. I created 35 different options of frames based on the work by Terracina-Hartman (2017). Nearly a quarter (22%) of the stories were unrelated to wildfires upon reading, and 10 percent of the stories were not related to American wildfires. These stories were disregarded from the study, which resulted in 195 frames. The most common frame was a fire update, which included a status report on the fire and fire damage (37.9%) Only one story had a primary frame related to agriculture (.51%) Two stories discussed threats to wildlife (1.0%). There were This research is important because it shows that agricultural and environmental factors are often not covered by mainstream press during periods of tragedy, such as a wildfire, despite large losses of farmland, forests, and other natural resources (USDA, 2018).