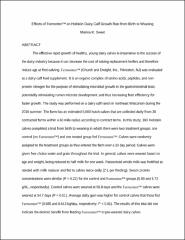 The effective rapid growth of healthy, young dairy calves is imperative to the success of the dairy industry because it can decrease the cost of raising replacement heifers and therefore reduce age at first calving. Fermenten™ (Church and Dwight, Inc., Princeton, NJ) was evaluated as a dairy calf feed supplement. It is an organic complex of amino acids, peptides, and non-protein nitrogen for the purpose of stimulating microbial growth in the gastrointestinal tract, potentially stimulating rumen microbe development, and thus increasing feed efficiency for faster growth. The study was performed on a dairy calf ranch in northeast Wisconsin during the 2016 summer. The farm has an estimated 5,000 hutch calves that are collected daily from 30 contracted farms within a 60 mile radius according to contract terms. In this study, 390 Holstein calves completed a trial from birth to weaning in which there were two treatment groups: one control (no Fermenten™) and one treated group fed Fermenten™. Calves were randomly assigned to the treatment groups as they entered the farm over a 10 day period. Calves were given free choice water and grain throughout the trial. In general, calves were weaned based on age and weight, being reduced to half milk for one week. Pasteurized whole milk was fortified as needed with milk replacer and fed to calves twice daily (2 L per feeding). Serum protein concentrations were similar (P = 0.23) for the control and Fermenten™ groups (5.89 and 5.72 g/dL, respectively). Control calves were weaned at 56.8 days and the Fermenten™ calves were weaned at 54.7 days (P < 0.01). Average daily gain was higher for control calves that those fed Fermenten™ (0.685 and 0.613 kg/day, respectively; P < 0.01). The results of this trial did not indicate the desired benefit from feeding Fermenten™ to pre-weaned dairy calves.