An Investigation of Two Notch Regulated Genes in the Cardiovascular System 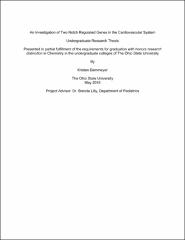