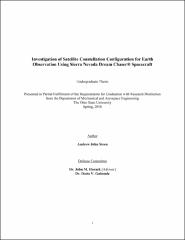 As the global climate crisis continues to drive extreme weather conditions, the need for increasingly robust systems to deliver unprecedented Earth Observation (EO) data will become a major economic concern for nations worldwide. The need exists for an international open platform for EO that can be utilized by small, less economically or technologically advanced nations for data acquisition as they attempt to deal with environmental disasters. The purpose of this project is therefore to develop an orbital strategy for the construction and utilization of an EO constellation of satellites, using as its platform the Sierra Nevada Corporation’s Dream Chaser® spacecraft after its supply missions are completed at the International Space Station. In this paper I summarize the current international access to highly temporally, spectrally, and spatially precise EO for close to real-time disaster response and the apparent lack thereof, I introduce the benefits of a collaborative and dynamic international platform under the initial context of a fleet of Dream Chaser orbital platforms, and detail the orbital mechanics theory and approach to enabling passively and actively responsive EO for the chosen relevant case study of the South East-Asian region. Initial results indicate that such a system could enable needed disaster response efforts from space in regions of the world with the least access to them but the highest need for them due to the onslaught of extreme weather patterns created by global climate change.