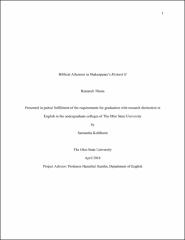 This text explores the intentional use of biblical allusions throughout Shakespeare's historical tragedy of Richard II. The main biblical allusions that are focused on throughout this text are those to the book of Genesis, the doctrine of the divine right of kings as set forth in the book of Samuel, and the various Gospels throughout the New Testament. This text also expands on various historical aspects of the reign of King Richard that led to his downfall as well as the implications of Shakespeare's play during the Essex Revolt in his own day. The use of allusion to the book of Genesis is used throughout the play to compare England to the Garden of Eden, and also to liken various characters to Adam and Eve or Cain and Abel. Allusions to the book of Samuel bring into question the doctrine of divine right and Richard's right to the throne; Kantorowicz's theory of the king's two bodies is also applied to the play to understand the duel personalities of Richard as a result of divine right. Richard's understanding of himself as a twin-natured person allow for him to compare himself to Christ toward the end of the play in a hyperbolic metaphor that many scholars still debate today. The controversy that is brought forth by many of this biblical allusions made the play a politically sensitive piece that made it the ideal choice for those in the Essex Revolt to have performed the night prior to their rebellion against Queen Elizabeth, and it is still today understood as politically sensitive and controversial.