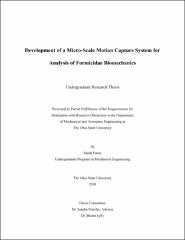 Previous investigation has determined that ants are able to lift and support loads up to a magnitude of 1,000 times their body weight. The load path through the ant's body passes entirely through the neck, one of the thinnest structures in diameter on the ant, before it is transferred and distributed to the rest of the body. In order to gain a better understanding of the structural and material properties of the neck tissues, previous research was completed utilizing mechanical loading studies and Scanning Electron Microscopy. SEM was utilized to analyze the location of material failure in the transition region between the soft tissue and the exoskeleton. The mechanical loading study was used to determine several mechanical properties of the neck region, including ultimate failure stress and overall elastic modulus. The experimental procedure employed in the mechanical loading study involved a centripetal loading mechanism, which acted in a generally axial direction, but the method did not allow for precise measurement of either force or neck position at the time of failure. In addition, both the SEM and mechanical loading tests were performed post mortem, which did not allow for physiologically relevant positioning of the ant while lifting and carrying objects in a natural setting to be studied. The goal of this work is to explore the internal biomechanical loads of the ant neck throughout the typical physiological range of motion through in-vivo motion capture. In order to develop and validate a method of motion capture of these phenomena at a physiologically appropriate scale, two orthogonally located Go-Pro Silver 4 model cameras with macro lenses were utilized to capture relevant videos of  Camponotus pennsylvanicus (Carpenter) ants, which were then processed using Tracker Video Analysis and Modeling Tool and imported into Matlab to determine the range of motion.

The Ohio State College of Engineering