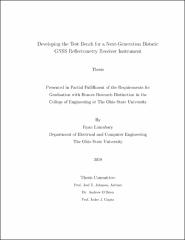 Recently, scientists have started to exploit global navigational satellite system (GNSS) signals for geophysical remote sensing using a technique called "reflectometry" (GNSS-R). This involves an airborne or spaceborne receiver measuring direct GNSS satellite signals as well as the reflected signals off of the surface of the Earth. This enables scientists to measure properties of Earth’s surface at the reflection point. NASA launched a constellation of eight micro-satellites, called CYGNSS, in December of 2016 that carried GNSS-R receivers. CYGNSS tracks reflected GPS signals to measure ocean wind speed for hurricane forecasting. Use of GPS signals has several advantages in terms of cost, temporal coverage, and spatial coverage. Researchers at The Ohio State University are involved in the CYGNSS Science Team and testing of first generation GNSS-R receivers. The success of the project so far has motivated a potential follow-on mission as researchers are identifying opportunities for improvement and expansion of reflectometry capabilities. A next-generation reflectometry receiver is being developed which should be capable of tracking more than the GPS L1 C/A-coded signal to increase the number of visible reflections. To evaluate the behavior of this new instrument, a test bench is implemented based on a test-system created for CYGNSS. The design and validation of the test bench is documented in this thesis. The test bench developed for CYGNSS is not capable of simulating other GNSS bands, cannot generate long-duration signals, and does not incorporate GNSS meta-data or navigational messages in its simulations. The purpose of this project is to improve the quality of the test bench hardware and software used to test GNSS-R instruments and add support for the new instrument's enhanced features. In this work we accomplish the following tasks: we assemble a transceiver from software defined radios; we modify the signal generator for parallel processing; we provide an efficient and simple user interface; we add support for the L1, L5, E1bc, and E5a bands; and we include actual satellite meta-data, including navigational messages and realistic timing information, in our simulations. Deliverable test signals, which are generated and transmitted by the completed system, are validated to confirm an accurate simulation of the receiver's space environment. Analysis of time-domain samples verifies modulation of spread-spectrum codes and simulated doppler shift. An FFT of these time-domain samples visually confirms the frequency contents of these signals in spectrum plots. Signal acquisition is performed on the files to identify PRN codes and verify the presence of multiple satellites. RF lab equipment verifies the frequency content of the test-system output. In the Summer of 2018, testing of the completed receiver will commence. We plan to subject the receiver to a 24-hour broadcast of a dual-band signal from the test bench according to the procedure outlined in a test plan developed by May 15th. We hope that this effort discloses any problems with the receiver prior to space deployment, at which time it will be impossible to make changes. This research provides a valuable tool for testing reflectometry receivers in the future. It is easily adapted for expansion of features and to add support for alternative applications. The test bench supports development of a valuable reflectometry instrument, which may facilitate the University's involvement in a follow-on mission to CYGNSS.