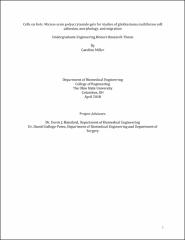 Glioblastoma Multiforme (GBM) is the most commonly diagnosed brain cancer, with limited treatment options, no cure, and a median survival time of 15 months1. One of the reasons for GBM's poor prognosis is the cells' highly migratory behavior. GBM cells diffuse through the brain along white matter tracts creating an ill-defined tumor. Operating in the brain is risky, and with an ill-defined tumor surgery is unsuccessful at removing enough cancer cells to completely prevent recurrence. To research treatment options for GBM, there first needs to be research on the mechanisms behind GBM migration. Since migration behavior is highly dependent on substrate characteristics, the substrate needs to mimic in vivo conditions, meaning the substrate should have a low Young's Modulus and be patterned at the micron scale2. A protocol for patterning 1kPa, 10kPa, and 120kPa polyacrylamide (PA) gels with 2µm lines was established to meet this need. The protocol used a sacrificial mold made of polystyrene (PS) that can be dissolved with anisole to micropattern the PA gels consistently. GBM cells were then seeded on the PA gels and stained and imaged for analysis of cell adhesion, morphology, and migration. The PA substrates were cytocompatible and allowed for more in depth analysis of GBM migration than previous methods. This protocol could be used for analyzing individual resected tumors to provide a more accurate diagnosis for patients. The pattern on the substrate could also be changed to mimic a variety of different microenvironments within the body. The cells' initial attachment to the softer substrate was slower, which may indicate slower migration on softer substrates. This information opens up the possibility of changing the brain environment to slow migration of GBM cells.