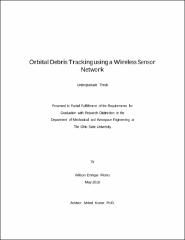 One of the biggest threats faced with space exploration is a problem known as Space Situational Awareness (SSA). SSA is the ability to view, understand, and predict the physical location of space debris with the objective of avoiding collisions. Space debris, or orbital debris, is the collection of defunct human-made objects orbiting the Earth. Currently, the U.S. Space Surveillance Network is capable of tracking millions of objects larger than 1 millimeter in size using 20 sensor sites around the world. Moving at thousands of miles per hour, orbital debris is more probable to have high-speed impacts between objects. Randomly distributed around Earth's orbit, objects that do collide cause even more fragmentation debris, allowing the problem to grow. To minimize debris generation in Low-Earth orbit, monitoring with high precision is required. Although capabilities in monitoring debris already exist, being able to track smaller debris in the space environment will be important to future spacecraft design. The challenge that arises with orbital debris is predicting current and future debris trajectories. This investigation focuses on tracking a moving target using wireless sensors, in order to characterize uncertainty on the target's physical location. This study will experimentally characterize state uncertainty using robots in connection with a network of sensors within a static environment in the laboratory. Results show that uncertainty with sensors, motors, and target dynamics are all areas that can be examined further to improve target tracking. This study will provide insight to not only space applications, but also areas in wildfire monitoring.