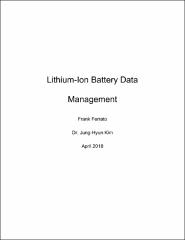 Lithium Ion Battery research is growing due to the need for renewable resources. Since the amount of research is growing so is the amount of data collected. With all this data it is taking more and more of researcher's time to process all the raw data collected by battery cell cyclers, such as Arbin. Dr. Jung-Hyun Kim, my research advisor, has estimated that it takes up about a third of his time right now just to process data after running tests. With this rise in research the goal is to automate this process, by creating an open source universal user-friendly program. Initially it starts with understanding all the ways that researchers will analyze data to find different properties such as, capacity and cycle life of a battery. Alongside of this an understanding of how raw data is produced and what format it comes out in. With both of these locked down a beginning program to process the data can be designed. To make it user friendly a GUI (Graphic User Interface) will likely be used so that instead of someone knowing how to code all they have to do is understand what kind of data they want to process and take a few clicks to get the final process of the data. Once a prototype program is created it will be shared with many of Dr. Kim's researchers for them to use with their own data that are collecting for them to characterize their battery cells. Feedback about the program will be obtained and improvements will be made. Then this program will be shared on the internet to create an open source base program. The hope is that many universities will use this to conduct their own analysis. Not only will they use it but they will make improvements on it and continue to share their improvements to the program and addons to better the research community of Lithium Ion Batteries. This could be the beginning of a program that will change the way battery research in conducted hopefully cutting the time that Dr. Kim has estimated from 1/3 to less that 1/20 of a researcher's time. Put the struggle of processing data behind them to allow them to focus more time on improving batteries in safety capacity and cycle life.