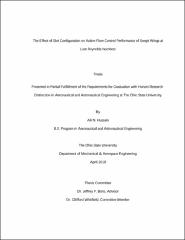 Active flow control (AFC) in the form of a discrete wall normal slot was investigated on a NACA 643-618 laminar wing model. The wing model has a leading-edge sweep of (Λ = 30°) and tests were performed using a chordwise Reynolds number of 100,000 with specific focus on the stall characteristics and performance of AFC while reducing energy needs. The study included comparing a segmented slot to a single continuous slot as well as the positioning of the slot itself along the chord at a spanwise location of z/b = 70%. For an Aeff/A of 0.5 (as compared to the original slot) maximum lift performance improved 9.6% for multiple slots while a single slot improved the maximum lift by 8.3% over the baseline. Surface flow visualization using tufts revealed that a single slot is much more effective at stopping spanwise flow and delaying stall to a higher angle of attack by 4°. For an Aeff/A of 0.75 (as compared to the original slot), lift performance improved 15.6% and 16.2% by covering x/c = 25% of the slot on the pressure and suction side of the airfoil, respectively. Covering the pressure side of the slot yielded lower drag from 20° - 24°. Through all configurations, the maximum lift coefficient is seen to depend on and increases with added Cμ. However, other performance characteristics such as drag and stall angle depend on the physical configuration of the slot. In addition, the configuration of the slot can also impact the pitching stability of the wing and delay the onset of an unstable pitching moment by up to 20°. Future work may seek to target specific performance areas by strategically placing the slot or only activating certain portions of the slot.