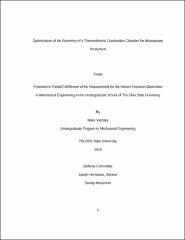 Common modes of power production require the use of dynamic devices that are heavy and require a considerable amount of maintenance. Thermoelectric materials generate electricity using a physical phenomenon known as the Seebeck effect. The Seebeck effect produces a voltage difference from the temperature gradient in a material. Therefore, by heating up one end of a material and keeping the other end at a lower temperature, a voltage difference is produced. The objective of this research was to create a portable means of power production from readily available thermoelectric materials and determine ways in which the geometry of this device could be modified to improve the TEG's overall performance. Construction of the device consisted of three main components: a small camping stove, butane fuel canister, and a thermopile constructed of type E (Nickel-Chromium / Constantan) thermocouples. The thermopile also acted like a flashback arrestor, preventing the flame from propagating back to the propane/butane fuel canister. During testing, the fuel exited the canister, flowed through the thermopile and then ignited. Changing the geometry of the design of the combustion chamber were analyzed to determine which designs improved the performance of the TEG.