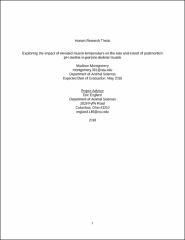 When an animal is harvested for meat, the resulting carcass is processed to provide safe and wholesome meat products for the consumer. One of these processing steps for pigs known as scalding involves heating the carcass in hot water (60ºC) in order to remove the hair. Despite its necessity, previous data from our research group has indicated that muscle temperature increases from normal body temperature of 39ºC to 43-47ºC in current commercial pigs during scalding. This rise in temperature may delay carcass chilling and be detrimental to pork quality. Therefore, the objective of this investigation was to determine the effects of increased muscle temperature early postmortem on pork quality. We hypothesized that increased muscle temperature will accelerate postmortem pH decline which is detrimental to pork quality. To test this hypothesis, samples from two glycolytic muscles (longissimus dorsi and biceps femoris) and one oxidative muscle (masseter) were collected immediately after slaughter and frozen. The tissues were powdered and homogenized into our in vitro system designed to mimic postmortem glycolysis. The homogenates were incubated in a programmable dry heating block with three different temperature programs. The temperature programs were chosen to subject the in vitro muscle homogenates to the raised muscle temperatures changes caused by scalding. Samples of the homogenate were removed at 0, 20, 40, 60, 80, 100, 120, 140, 160, 220, 250, and 1440 min for pH analysis. Increasing the temperature of longissimus dorsi and biceps femoris to 43ºC resulted in significantly faster rates of pH decline and an ultimate pH below what is desired. This suggests the longissimus dorsi and biceps femoris are susceptible to a deterioration of fresh meat quality characteristics caused by an increase in temperature early postmortem. Therefore, data from this study suggest that scalding temperature and time duration need to be reevaluated to ensure pork quality is not negatively affected.