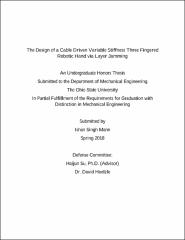 Soft robotics is an important milestone in the field of robotics research. Due to high compliance of soft robots, they can be extremely durable, less likely to cause damage to the surrounding environment, and hence much safer for use around humans. However, there are some limitations with highly compliant soft robots. The inherent flexibility of a soft robot makes it difficult to know the exact position of soft robot's end effector, which compromises positional accuracy of soft robots. Also, high loads and quick acceleration cause a soft robot to flex, which limits the potential uses of soft robots over traditional robots. Previous research has shown that a variable-stiffness robotic link can prevent the link from getting flexed when carrying high loads or during quick accelerations and deaccelerations by changing its stiffness. The purpose of this study is to make a variable stiffness three fingered robotic hand to demonstrate the benefits of variable stiffness. To do this, different variable stiffness technologies and actuation methods were studied, and layer jamming was selected as the variable stiffness technology with cables as an actuation method. A three-fingered robotic hand was designed which could be actuated by cables and change its stiffness by layer jamming. The designed robotic hand was tested by lifting different objects and the maximum load carrying capacity of the hand was determined to be 9 times more when using variable stiffness. The developed soft robotic hand which can vary its stiffness shows the potential to overcome the major limitations of soft robots and expand the areas where soft robots can be potentially used over traditional robots to promote a safe workplace environment which involves human-robot interaction.