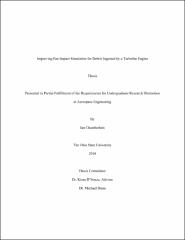 Unmanned Aerial Vehicles (UAVs) pose a new threat to the safety of airplanes. Turbofan engines have been designed and tested to survive foreign object ingestions for decades. For example, turbofan engines are tested for their ability to withstand a bird strike. However, UAVs have components which are harder and denser than birds. These differences make it impossible to predict the damage from UAV ingestion based on a bird of the same mass. To assess the risks that UAVs may pose in an engine ingestion scenario, researchers are using finite element software, such as LS-DYNA, to simulate collisions resulting from the ingestion of a UAV into a jet engine. The goal of this project is to develop and test new meshes for use in continued research studying the damage suffered by the fans of jet engines after UAV ingestion. These new meshes aim to improve on old meshes by removing all tetrahedron elements and taking contacts out of the blades. The new meshes are then impact tested in LS-DYNA to examine their improvements relative to the previously used meshes. Impact testing is carried out using a steel bolt. The results obtained through these impact tests confirm the hypothesis that a stress discontinuity occurs across the blade contact used in the old mesh of the fan. It is also discovered that a plastic strain discontinuity also occurs across the blade contact under high energy impacts. The new mesh is successful in resolving both of these problems and is composed of about 98% hexahedron elements.