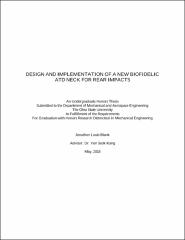 Anthropomorphic test devices (ATDs) are intended to provide a humanlike response in experimental scenarios where using human volunteers or post-mortem human surrogates (PMHS) are either inappropriate or impossible. Therefore, an effective ATD must be biofidelic, meaning that it must replicate the response of a human in an automotive impact. A current regulation allows for the use of the Hybrid III ATD in rear impacts although it was designed for frontal impacts only, and the ATD's neck has been found to exhibit poor biofidelity in this scenario. One of the more biofidelic rear impact necks, the BioRID II, only allows for 2D sagittal plane motions due to its use of revolute joints between each pair of cervical vertebrae. The purpose of this study is to provide a new biofidelic, mechanical design for an ATD neck that allows more degrees of freedom, making it more representative of a human's neck and therefore more biofidelic. The neck's design is intended to anatomically replicate a human neck and includes seven individual vertebrae. Spherical joints were used in between these vertebrae, with the exception of the C1 and C2 revolute coupling, thus accommodating more degrees of freedom. Four strands of wire rope, two anterior and two posterior, in combination with polymer damping material, were utilized in the design to control the kinematics of the neck. Dynamic simulations using a commercial multibody dynamics software (e.g. MSC ADAMs) were conducted in order to validate the design's biofidelity by mimicking the results of previous rear impact PMHS study conducted at The Ohio State University. Damping material and wire ropes were modeled using two and one-way spring dampers, respectively. A physical model was then fabricated, and a rear impact will be simulated on a sliding head and neck fixture. Biomechanical targets created from this previous rear impact PMHS studies were used to evaluate the responses from the simulation, and will be used to assess the bofidelity of the physical model. NHTSA biorank scores (BRS) were calculated to evaluate the results of the simulation. BRS for head kinematics measured from the simulation was less than two. The resulting ATD neck is the product of a novel design process with the objective of improving biofidelity. The neck will ultimately help to increase occupant safety in rear-end automotive collisions as it will provide car manufacturers with a more humanlike tool from which they can base future car safety design features.