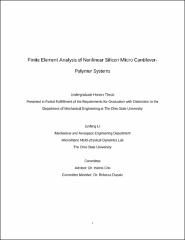 Micro-electro-mechanical systems (MEMS) have been known for their phenomenal performance in sensing, controlling, and actuating. Researchers and engineers have widely investigated MEMS for various applications such as hypersensitive sensors, radio frequency (RF) MEMS, optical MEMS, signal processing elements, and logic devices. Micromechanical resonators are often used in MEMS as a main mechanical component in aforementioned applications and the functionality of MEMS largely depends on the dynamic behavior of micro-resonators. Due to their small size and low damping, nonlinearities are readily observed in the dynamic response of micro-resonators. Recent research efforts are focusing on exploiting unique nonlinear features in designing tunable nonlinear micro-resonators. This research aims to take advantage of finite element analysis (FEA) as a complementary approach to experimental characterization and analytical modeling in designing nonlinear micro-systems. As well as providing an accurate estimation of the level of nonlinearity in the device, FEA provides various detailed field outputs at any location of the structure during nonlinear resonances. The proposed FEA methodology is based on imposing an initial deflection to the structure at the corresponding mode shape and releasing it from a relatively large amplitude to have the structure experience the free decay response. Backbone curves and frequency content graphs (including fast Fourier and wavelet transform) are obtained after postprocessing the dynamic response. FEA is conducted for two types of structures including single and double silicon micro-cantilevers with nonlinear polymer couplings. The simulated backbone curves have shown good agreement with experimental results for both types of structures. FEA is also employed to obtain design criteria to calculate the targeted level of nonlinearity. In a single cantilever-polymer system, the effect of material properties of the nonlinear coupling on the backbone curve are studied parametrically to prove that there is a threshold value for Young's modulus of polymer which switches the global dynamics from nonlinear hardening to softening. In a double cantilever-polymer system, the physical position and thickness of the polymer coupling are found to be determinative on the level of nonlinearity and the global dynamics such that nonlinearity diminishes as the location of the polymer component gets closer to the middle of the structure; and the global dynamics changes from nonlinear hardening to softening as the thickness of the polymer coupling increases.