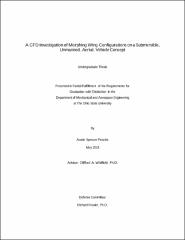 In 2008, the Defense Advanced Research Projects Agency, the central research and development organization for the United States Department of Defense, released a challenge for designers to create a vehicle that both flies and operates underwater. With the intent of reaching a target quickly and stealthily, the proposed mission focused on combining medium-altitude flight, low-altitude flight, and underwater navigation capabilities into a single entity. Medium-altitude flight would allow the vehicle to approach its target quickly. Low-altitude flight would allow the vehicle to get close to its target by hiding behind the curvature of the earth, effectively blocking radar and direct line-of-sight detection. And lastly, underwater navigation would enable the vehicle to get even closer to its target and to loiter in an area undetected. Due to the varying atmospheric densities and the influence of the ground effect phenomenon, this research focused on the wing design for a submersible unmanned aerial vehicle concept. The trade study concentrated on the configuration and aspect ratio design of a wing capable of optimum performance in both medium-altitude and low-altitude flight conditions. Morphing wing configurations with variable wing sweep and variable wing anhedral were analyzed for their potential to meet desired performance characteristics in both the cruise and skim flight conditions. Although the morphing wing configurations tested proved adequate, a fixed, Reverse Delta wing with 10⁰ anhedral configuration at an aspect ratio of 3.37 was identified as having the ideal characteristics for optimum performance in each flight mode. The computational fluid dynamics software, XFLR5, provided the lift coefficient and moment coefficient data used to evaluate each wing configuration. This study provided evidence that combining vehicle abilities at differing flight altitudes is possible and can equip aircraft with more effective methods for achieving low observability states.