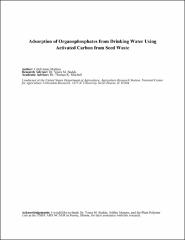 A constant concern in modern agricultural production is pesticide runoff. Pesticides can leach into groundwater or be released into the atmosphere and return as contaminated rainwater. One method of mitigation is in the form of activated carbon, which possesses a net negative charge and functional groups which allow for the adsorption of chemicals from water. For this study, pyrolized seed was treated with phosphoric acid to increase the porosity of the char. This increased porosity leads to a greater surface area, and thus more room for the pesticide molecules to bind, which in this case were three commonly used organophosphates: parathion, malathion, and diazinon. To test the adsorptive capacity of the acid-treated seed biochar, three organophosphates were prepared at various concentrations for batch and column adsorption experiments. Parathion, malathion, and diazinon were reacted with the biochar and samples were taken using a syringe with a 0.2μm filter then examined via HPLC analysis to determine the concentrations left in the solution by utilizing the area under the produced curve. These samples were also compared with those of a control activated carbon source, F300 carbon from Calgon. The pesticides were chosen due to their heavy usage in agriculture and the carbon source was chosen as it does not have as much literature surrounding it as the other sources of activated carbon do. Initial kinetic studies have shown that the acid-treated seed approached a concentration of 0.000 PPM at a faster rate than the F300 for parathion and diazinon, with the malathion solution reaching 0.5901 PPM at 24 hours for the acid-treated and 0.000 PPM for the F300.

Nominated for Office of Energy and the Environment Sustainability Award
College of Food, Agriculture, and Environmental Science Senior Internship Award