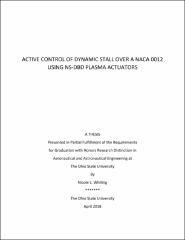 Dynamic stall occurs in applications where airfoils are rapidly changing angle of attack, like rotorcraft or wind turbines. When the change is fast enough, flow over a pitching airfoil remains attached beyond the static stall angle. This results in the formation of a dynamic stall vortex (DSV) on the leading edge of the airfoil, which eventually convects over the airfoil and sheds. During DSV convection and the accompanied flow separation, unsteady aerodynamic loads are produced. These loads can lead to fatigue and eventually structural failure, making it essential to mitigate the effects of dynamic stall. Nanosecond Dielectric Barrier Discharge (NS-DBD) plasma actuators have shown promise at mitigating dynamic stall and reattaching the flow over a NACA 0015 airfoil, a thick, symmetric airfoil, significantly reducing unsteady loads. A high-voltage nanosecond pulse drives the actuator and creates rapid, localized heating that results in a thermal perturbation. The thermal perturbation then excites the flow's natural instabilities and generates coherent flow structures. Previous work has shown that high Strouhal number (non-dimensional frequency) excitation results in small structures that quickly develop, breakdown, and result in smooth, partial reattachment of the flow whereas low Strouhal number excitation results in large structures that are capable of fully reattaching the flow cyclically and lead to unsteady loads. This work aims at improving upon the previous work by upgrading the facility and data acquisition and reduction systems and using a thin airfoil to make the results more relevant to rotorcraft applications. A NACA 0012 airfoil is chosen because it is a well-documented, thin airfoil. Facility upgrades include integrating all systems into a National Instruments CompactRIO, which will allow for better synchronization between all control systems and measurement instruments. The airfoil pitching mechanism has been changed to a direct-drive servo, this allows for more accurate pitching angles over the previous setup, which used belts that could stretch and cause a phase delay. Previously the lift and drag on the airfoil were calculated by integrating pressure measurements which introduced error due to potential three-dimensionality in the flow. Therefore, a load cell will be used instead to directly measure the forces and momentum on the airfoil. Mitigating the negative effects of dynamic stall has the potential to increase the lifespan of blades and increase lift, which will allow rotorcraft to fly higher, faster, or carry larger loads.