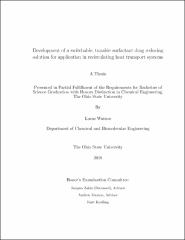 Surfactant drag reduction is a flow phenomenon by which as little as a few parts per million of certain chemical additives can reduce the turbulent pressure loss by over 80%. Various drag reducing additives exist; however, surfactant drag reducing additives are unique in their ability to rapidly reassemble after periods of high shear, making them particularly useful in recirculating systems. Such recirculating systems include district heating or cooling systems. One intrinsic limitation of drag reducing solutions is their reduced heat transfer ability. This limits their usefulness as heat transfer fluids. For this reason, various methods of increasing heat transfer in drag reducing fluids have been developed. All of these prior methods, unfortunately, act on not only the drag reducing structures, but also the bulk solvent. Surfactant drag reducing fluids are also unique in that due to their self assembled nature, they have the potential to be "switched" on or off. This is done by modifying the thermodynamic equilibrium structure of surfactant micelles from drag reducing(heat transfer reducing) structures to non-drag reducing (non-heat transfer reducing) structures, and back to drag reducing structures. This has been done with some success by modifying the chemical composition; however, whatever chemical composition changes that are made need to be reversed. In the case of pH adjustment, for example, salts accumulate in the system. The most desirable case would be a self assembled (shear stable) drag reducing solution that can be switched (for excellent heat transfer) by modifying only the drag reducing nanostructures, and that switch is done only using stimuli intrinsic to a district heating or cooling system (flow rate or temperature). In this study, a surfactant drag reducing system was developed showing extreme responsiveness to very small changes in temperature and flow rate. Furthermore, the flow rate "switch" could be shifted with temperature and vice versa. These shifts were correlated with shear viscosity data. These shifts were compared with Cryo-TEM images, prior work, and predictions from thermodynamics. The switch developed could be used to understand the structures that cause drag reduction.