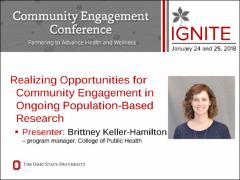 You are important to others. One in four American adults or teens struggles with a brain disorder at some point in their life. You can #BeTheDifference to a person who is struggling with an illness that impacts his or her ability to live, laugh, and love. The presenters will point you in the direction of a certification that can enable you to save someone's life. More information can be found by visiting http://www.mentalhealthfirstaid.org.

This session will describe how researchers engaged the community in an active research project: the Buckeye Teen Health Study (BTHS). A study of adolescent tobacco use in urban and rural Ohio, BTHS initially identified individuals using a random sampling method called address-based sampling. However, with recruitment lagging among minority youth and youth living in lower socioeconomic status areas, the study team enhanced the random sample with a convenience sampling method. During the summer of 2015, BTHS researchers worked with Columbus Public Health's Office of Minority Health and Health Advisory Committees (HACs) to identify ways in which to reach out to the community and invite eligible members to participate in the study. To build a reciprocal partnership, the research team asked community members for information they would like to see about their neighborhoods after accrual was completed. HACs were interested in learning about how youth tobacco use differed by race, and how youth tobacco use in their HAC area compared to the rest of Franklin County. After accrual was completed in the summer of 2016, findings were presented to the Minority Health Advisory Committee and HAC meetings. At these meetings, the next steps of the study were also discussed and wishes for additional analyses using follow-up data were solicited. With input from community groups, the study team also agreed to assess tobacco marketing at stores that sell tobacco in each HAC region during the summer of 2017. The study team is again attending HAC meetings this fall to share one-year tobacco use incidence data and store audit findings by HAC area. Though our study did not begin with the community-based participatory research (CBPR) framework, we have worked with community groups in an effort to implement these practices going forward – demonstrating that it is possible to build relationships with community partners to enhance both the quality of research and health promotion efforts in communities after data collection has begun. The intended audience for this presentation includes academic researchers who are not engaging the community in their research because they think it is too late, that they do not have enough time to build a reciprocal relationship, or that community members will not be receptive to their findings. This presentation will be given by Brittney Keller-Hamilton, MPH. She earned her Master of Public Health degree in health behavior and health promotion from The Ohio State University in 2013, and she completed her culminating project on CBPR practices in a cancer-screening research project. She is the BTHS program manager and participated in the community meetings, implemented community members' ideas for recruitment, and oversaw data analysis for the reports back to the community.
AUTHOR AFFILIATION: Brittney Keller-Hamilton, Program Manager, College of Public Health, keller-hamilton.1@osu.edu (Corresponding Author).