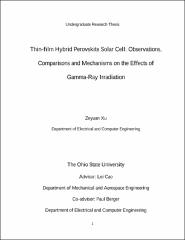 Perovskite solar cells (PSC) represents a new promising solar technology with great prospects. Much of research has been done to study and enhance the photovoltaic performance and so far, a power conversion efficiency (PCE) exceeding 22.1% has been reached. However, the stability of perovskites remains a major concern for commercialization. In this work, we report a comprehensive study of PSCs under continuous gamma-ray radiation with irradiation time up to 1,535 h and total dose of 2.3 Mrad. We performed thermal admittance spectroscopy (TAS) on the irradiated devices and found that gamma-ray radiation hardly induces trap states by introduction of crystal point defects. We compared the radiation stability of both p-i-n and n-i-p type of PSC devices and found that p-i-n PSC devices are highly robust to gamma-ray irradiation while the n-i-p PSC devices reduced their PCE by more than 35%. The in-situ measurements indicate that perovskite has features of self-healing to recover from the early degradation caused by gamma-ray irradiation. The post-irradiation evaluation reveals that the perovskite device with p-i-n structure could retain the PCE at 94.6% after correction of the Indium Tin Oxide (ITO) transmittance loss. These observations demonstrate that PSCs show impressive radiation stability against high-energy gamma-ray irradiation and can maintain electrical properties and physical structures in the long term. Th is study is the first to conduct systematical investigation of the effects of gamma-ray irradiation on the perovskite devices, which indicates their potential for future outer space applications.