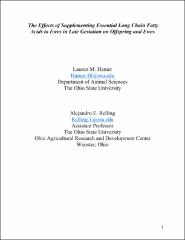 Multiple studies have shown improvements in performance of livestock due to supplementation of polyunsaturated fatty acids (PUFA). Other studies have shown an effect of PUFA on fetal programming of offspring in livestock, though little work in this area has been done with ruminants. This research was conducted to evaluate the performance effect of ewes and their lambs when the ewes were supplemented with increasing concentrations of the PUFA docosahexaenoic acid (DHA) and eicosapentaenoic acid (EPA) as Ca salts during the last 50 d of gestation. The PUFAs were supplemented at concentrations of 0%, 1% and 2% of the diet fed to gestating ewes. Ewes (n=24 per treatment) started receiving the supplements 50 d prior (d -50) to expected lambing (d 1). Supplementation finished on lambing day and all ewes received the same diet after lambing. Ewes were weighed, and body condition scored (BCS) at d -50, d -20, d 15 and d 60 (weaning). On d 15 milk production and composition were evaluated after 3 hours of separation of the lamb from the ewe. Lambs were blood sampled (to measure plasma concentration of glucose and NEFA) and weighed on d 1, d 15, and d 60. Data were analyzed using a mixed model of SAS, using a linear and quadratic polynomial contrast for mean separation. There was a quadratic effect (P = 0.01) for ewe body weight (BW). Ewes supplemented with 1% PUFA were heavier than ewes supplemented with 0 or 2% (94.8 vs 91.0 and 89.8 ± 1.06, respectively). There were no differences in BCS, milk production, fat or protein concentration, but there was a linear increase (linear P = 0.06) in lactose concentration. There was no difference in lamb BW, or plasma glucose and NEFA concentrations (P > 0.1). However, there was a time by treatment interaction for average daily gain (ADG; P <0.05). Lambs of ewes supplemented with PUFA at 1% showed a higher ADG (0.36 kg/d) than the 0% (0.31 kg/d) or 2% (0.33 kg/d) supplementation groups. The ADG from d 15 to d 60 was similar for the three treatments. A linear (P = 0.04) decrease in mRNA concentration of diacylglycerol acyltransferase 1, and quadratic changes (P < 0.06) in fatty acid binding protein 4, fatty acid transport protein 1, and peroxisome proliferator-activated receptor α were observed. This suggests that the supplementation of EPA and DHA during gestation affects ewe and lamb growth, and these effects may be dose dependent. The fact that the 1% EPA and DHA supplement showed a heavier BW for the ewes and the highest ADG for the lambs without affecting in the same manner MY or composition creates more questions to be answered regarding the biological effects of PUFA. Some of these performance changes could be attributed to changes in gene expression.