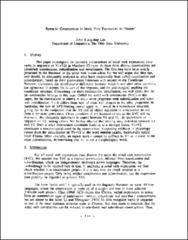 This paper investigates the syntactic constructions of serial verb expressions (two verbs in sequence as V1+V2) in Mandarin Chinese. At least three distinct constructions are identified: coordination, subordination and serialization. The first two have been widely presented in the literature as the serial verb construction, but we will argue that they can, and should, be adequately analyzed as what have traditionally been called coordination and subordination, based on their grammatical behaviors with respect to the Coordinate Structure Constraint, the distributional difference between A-not-A and alternative questions, the agreement in aspect, the scopes of the negators, and the phonological marking for coordinate structure. Concerning the third construction, serialization, we will claim that the lai-construction belongs to this type. Called the serial verb construction (SVC) in this paper, the lai-construction is shown to share some properties with subordination and some with coordination, but it differs from both of them with respect to the other properties. In particular, the rule of VP2-fronting cannot apply as it would in a subordinate structure, giving rise to the conjecture that the V2 and its object argument in serialization do not form a syntactic constituent. Other correlates of the lai-construction as the SVC will be discussed: the obligatory agreement in aspect between V1 and V2, the prohibition of negation on V2, among others. We further observe that nothing may intervene between V1 and V2. Such a strict intervention constraint leads us to a stronger claim: V1+V2 constitutes a morphological word in the construction. Supporting evidence in phonology comes from the participation of V1+V2 in the word internal sandhi, traditionally called Final Elision. More crucially, an aspect marker cannot be suffixed to V1 as it could in the other constructions, demonstrating that V1 is not a morphological word.