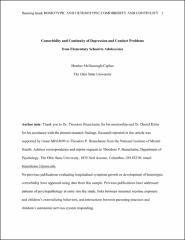 Despite non-overlapping criterion sets, conduct disorder and depression co-occur at much higher rates than expected by chance. Contemporary model-based approaches to explaining heterotypic comorbidity use factor analysis and its variants to evaluate inter-relations among symptoms in large population-based and twin samples. These analyses invariably yield broadband internalizing and externalizing factors, which load on a higher-order general liability factor—findings that are robust across age and informant. Although model-based approaches elucidate structural aspects of comorbidity, they are variable-centered, and usually cross-sectional. Most therefore do not assess developmental continuity of comorbidity, or whether non-comorbid individuals are prospectively vulnerable to heterotypic comorbidity. We use an accelerated longitudinal design to evaluate growth in parent-reported conduct problems (CPs) and depression among children, ages 8-15 years, who were recruited at study entry into depressed only (n=27), CPs only (n=28), comorbid (n=81), and control (n=70) groups based on levels of symptoms. Consistent with normative developmental trends across this age range, steep growth in depression was exhibited by all groups, including those who reported only CPs at study entry. In contrast, growth in CPs was restricted to those who reported high symptoms at intake (with or without comorbid depression), compared with low and stable among depressed only and control participants. To our knowledge, this is the first study to demonstrate, using carefully ascertained “pure” versus comorbid groups who were followed naturalistically, that comorbid depression is likely to develop among those with pure CPs, but comorbid CPs are not likely to develop among those with pure depression.