Development of an Augmented Reality Testing Platform for Collaborative Robots 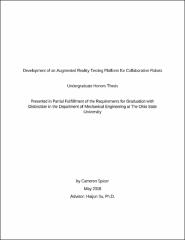 In manufacturing, the reliance on robotics is increasing. Current industrial robots are designed for large production lines but suffer from issues, such as safety concerns and complicated programming. Collaborative robots or "co-robots" may solve these problems to make robotics useful for small and medium scale operation. These co-robots accomplish this by working with a human operator. The operator performs precise tasks, and the co-robot preforms repetitive tasks. The purpose of this study was to develop a testing platform for co-robots using the Microsoft Hololens and augmented reality (AR) device. AR is an emerging technology, which creates virtual holograms a user can interact with in the real world. The testing platform uses AR to simulate a manufacturing environment and an interactive co-robot, which are modeled in Unity, a video game platform. Unity’s built-in physics engine was leveraged to create hinge joints, which emulate the co-robot's motion. A test environment was chosen that simulated the assembly of an automobile front knuckle after consulting Honda Manufacturing. The user directs the robot on where to pick up and place cumbersome parts to assemble the knuckle. The parts that make up the knuckle are heavy for humans, so an assisted lifting device is typically used. The robot would replace the device removing the human guidance and increasing production. This research shows the Hololens can be used to effectively model a manufacturing environment with an interactive co-robot. Additionally, a robust platform for research and programming of a co-robot can be created in AR. This research was the first step in developing a platform for testing co-robots in any manufacturing environment using AR. With more development, this platform would allow for companies to test co-robots and hopefully, increase the use of robotics in small and medium scale manufacturing environments.