Seeking Reconciliation Without Capitulation: The History of Justification in Lutheran-Roman Catholic Dialogue 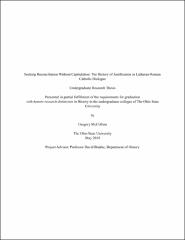 Traditionally, differences on the doctrine of justification have been regarded as paramount in maintaining the schism between Catholics and Lutherans since the Reformation. However, there have been numerous instances in which the two communions have entered dialogue and sought to assess their differences on the topic of justification. In 1541, a group of prominent Lutherans and Catholics attended a meeting organized by Holy Roman Emperor Charles V in Regensburg with the purpose of forming a religious settlement to restore unity within the Holy Roman Empire. Out of this meeting came an agreement on justification, which declared that Christians are both imputed righteousness and infused with transformative righteousness. This agreement, however, was rejected by Catholics and Lutherans not in attendance. In 1999, the Roman Catholic Church and the Lutheran World Federation signed the Joint Declaration on the Doctrine of Justification, a document that outlined a basic consensus on the doctrine and declared that justification was no longer a church-dividing issue. Many scholars have read these two documents in tandem, claiming that the rejection of the Regensburg agreement and acceptance of the Joint Declaration firmly evidences a theological convergence on the issue. However, this reading of the two documents is misled. The historical circumstances producing the two documents were radically different; 1541 was embattled by the polemics and politics of the Reformation and cannot be regarded as an era conducive to ecumenical agreement. The twentieth century, however, saw Catholics and Lutherans display a renewed interest in assessing their own and their counterpart’s soteriological paradigms. These incongruent circumstances make the two documents only imperfectly analogous. Additionally, while the two documents sought to reconcile the differences between Catholics and Lutherans on justification, the manners in which they did so differ significantly. While Regensburg sought to fit the different views of justification together, the Joint Declaration incorporated the two into a broader narrative of salvation that could be explained in various appropriate ways. While, the comparison of these two documents does not definitively evidence a theological convergence on justification, the differences between the two do reveal how fundamental assumptions about doctrine and religion are changing. Specifically, the Joint Declaration assumes that doctrines function more as traditional forms of expression rather than ontological truth statements, as Regensburg does. The extent to which justification remains a church-dividing issue today is dependent upon the way Christian groups consider the function that doctrine plays in their religious communities.